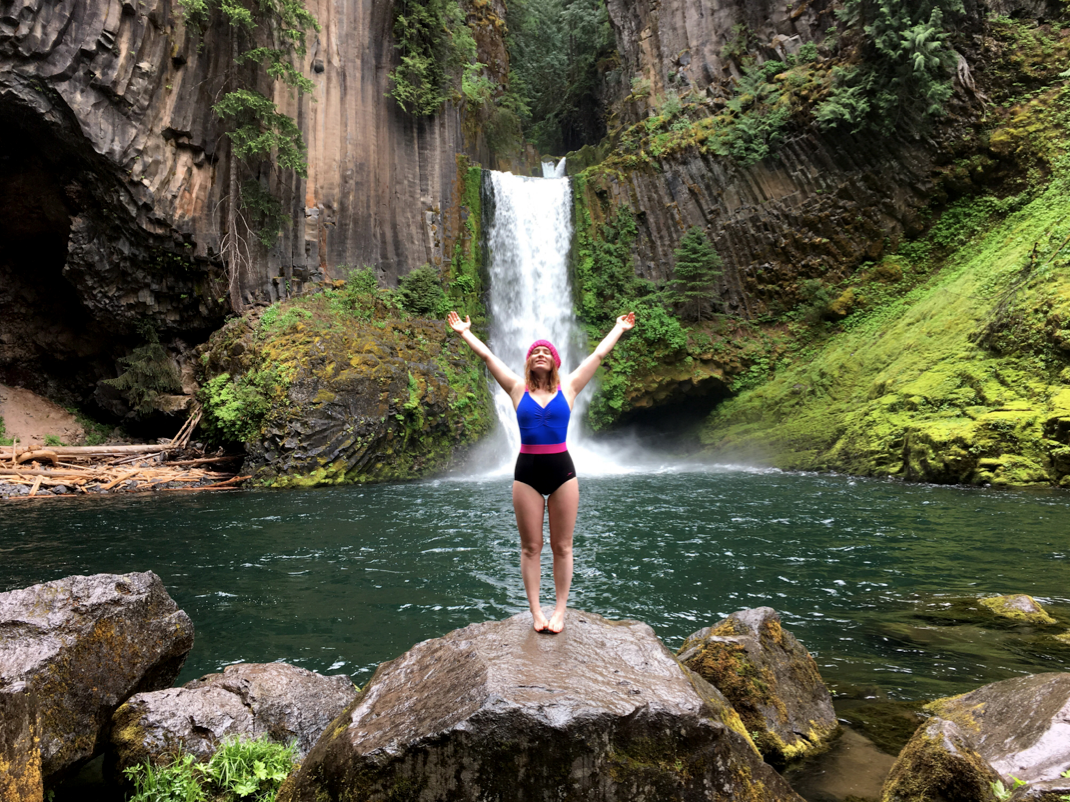 Our first stop in Oregon was the famous Crater Lake. We camped right before the National Park entrance at the “Annie Creek Sno-Park“– there was an amazing open, little hut next to parking lot, where we could recharge our camera batteries and had breakfast, since it was quite chilly outside. We went up to Crater Lake super early – which was the best choice, since after 15min the lake was covered in fog. But we had fun and jumped back into the car (it was really cold outside) and drove all the way to the Toketee waterfalls – which was an 1,5h drive…

And woooow the Toketee waterfalls are super amazing! They remind me of a waterfall in Iceland called “Svartifoss“. The little trail is very nice to walk and if you want you can walk all the way down to the waterfall, if you slip through the railing. There’s a  little hole… 😉 But it’s worth it. A bit steep, but you can hold on to many roots. So I was already wet, since it was raining, I decided to put on my new swimsuit and strike a pose in front of this amazing scenery!

Clothing & Gear you see in these images
(if you see something, which is not listed, but you really wanna know it, make a comment!)
HE WEARS: Fjällräven Pants & Jacket
SHE WEARS: LeSpecs sunnies | Vans shoes | Peak Performance Jacket | Patagonia Pants
GEAR: Nordisk Cuttlery | Primus Cooker Clothing & Gear you see in these images
(if you see something, which is not listed, but you really wanna know it, make a comment!)
HE WEARS: Fjällräven Pants & Tenson Jacket
SHE WEARS: Fjällräven Backpack | Didriksons Jacket & Pants | Lowa Boots | Speedo Swimsuit